Amid all the news of national elections and global pandemics, you may have missed the really big news around CB Nordic last fall: the Board of Directors elected a new president! Martin Catmur, long-time board member, will be stepping into the big shoes left by Rick Murray, who was the president for the last 7 years. We want to take this opportunity to thank Rick for his many years of service and congratulate Martin on his new distinguished position.

Rick’s legacy is one of costumes, fun, and professionalism, all at the same time. In addition to his always iconic Alley Loop costumes (foosball, lounge lizards, the list goes on . . .) , the Alley Loop Pub Ski is a signature Rick Murray creation. There’s nothing quite like skiing on skinny skis in snow-filled streets between bars as you perform stupid human tricks and take shots of liquor you’ve never heard of. In addition to this major accomplishment, Rick was essential in helping usher CB Nordic into the 21st century with an update to our brand, our logo, and an array of merchandise to go along with it. He was a critical player in creating Ruthie’s Run on the Bench, from designing the trail to running the bulldozer to create the homologated beauty we now know and love. In addition, he also helped hire Christie Hicks to transition CB Nordic into its next chapter. Rick’s incredibly fun, whimsical, can-do spirit will be missed at the helm, but thankfully he’s staying on the board for another couple years to make sure we “keep the funk,” and, in his words, “Martin will rock it!  He’s been deeply invested in the local running and nordic scene for a long time and he has a feel for it. CB Nordic is in good hands with him leading the board.” 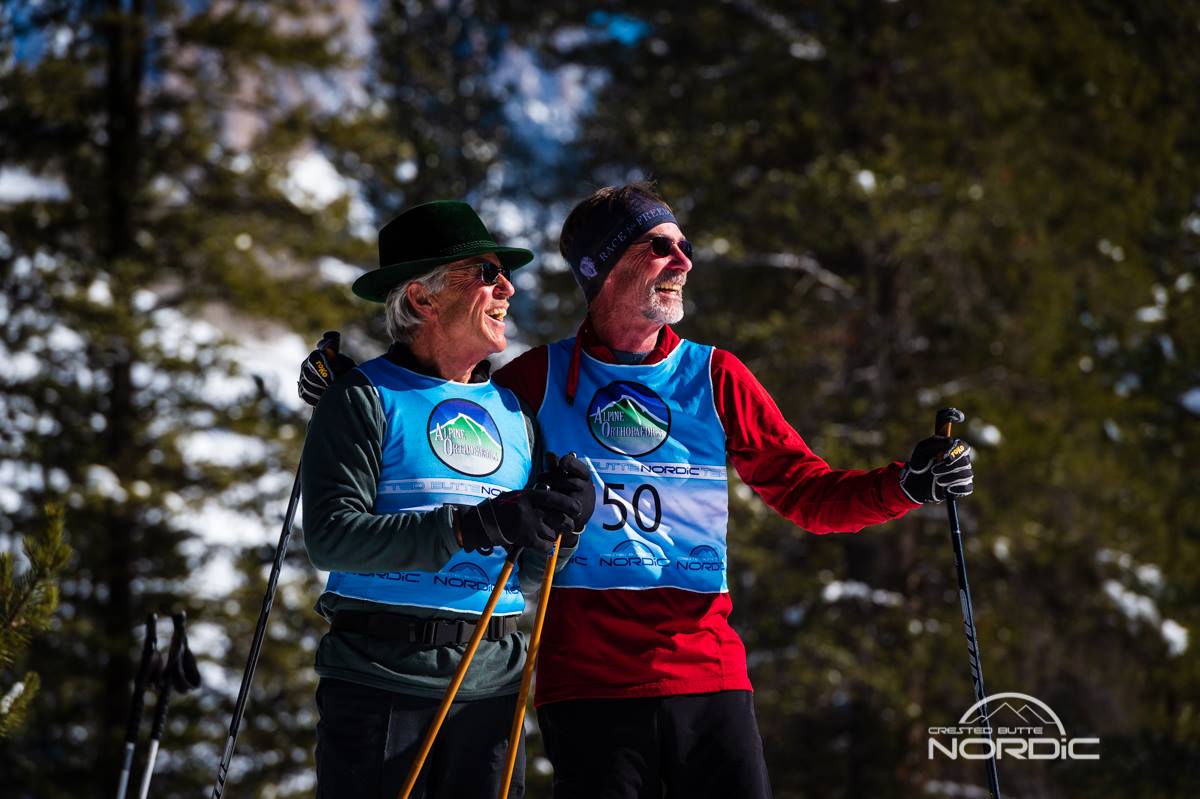 Many people know Martin and his wife Rosie from their 30+ years running the Cristiana Guesthaus, but Martin has also organized the CB Mountain Runners for about 25 years, served on the CB Nordic board for 4 years, and is a well known face at any/every running and skiing race in the Gunnison Valley. He’s completed dozens of Grand Traverses and Alley Loops, but, according to him, his greatest accomplishment is “raising two great kids [Emma and Nick] (though that was mostly Rosie’s doing)”. He’s excited about stepping into the role of president because of the community, the trails, and the boost we bring to the winter economy. As an avid nordic skier himself, Martin says “I want CB Nordic to succeed so I have trails to ski on! But I also love seeing how many people are out skiing the trails and enjoying themselves. I love the people that I meet Nordic skiing. There is always someone on the trail to chat to and catch up with. ”

That sense of community is one way CB Nordic contributes to a vibrant Gunnison Valley, but in addition, Martin is proud of our economic contribution. “In the late 80s alpine skiing was really the only business in the winter,” Martin says. “As that diminished it was important to support an alternative winter business that would bring people to town, as well as providing great affordable outdoor recreation to the community.” Martin hopes that CB Nordic can grow the number of destination visitors we bring to the Valley. “We may never be a giant destination area, but we have the trails, the views, and the town to support skiers coming to town for several days, and not just for our big events.”

Martin’s other big task as president will be to help CB Nordic build the Cat Barn Expansion to house the Team Room for our kids and Masters programs, which will then allow for a renovation of the current Big Mine Warming House. These much-needed capital projects will finally create a home for the expanding Junior and Masters programs, as well as providing more space for everyday skiers. “The valley is growing and we need to make sure all the new residents get to experience nordic skiing,” Martin says. With the growth in our programs and season passes, it’s time the facilities were expanded to support the skiers in our community and those yet to come. With Martin’s vast experience running a business, raising a family, and hosting events, he’s just the right person to help steer CB Nordic into the next chapter. Congratulations, Martin! And thank you, Rick, for everything you’ve done to get us where we are today. As one president passes the baton to the next, we’re excited for what the future has in store.